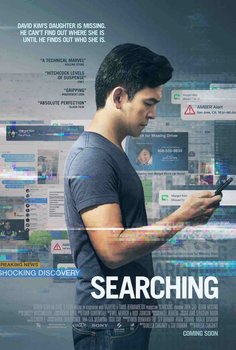 Recently, the world was dealt the hand of losing another talented musician and rapper Mac Miller due to a drug overdose.  People come in and out of our lives through death, loss of connection, and/or lack of communication.  The film Searching really hits home on how loss can affect us as it focuses on a typical Asian family living in America during the technology age as the teenage daughter (Margot) goes missing mysteriously one evening after a study group.  The father (David Kim) desperately searches through emails, social media, and friends to find out that maybe he didn’t really know his daughter at all.

The story was predominately shot through a computer camera, chat messages, live-streaming, video recordings, and social media platforms such as Facebook.  I think the director really focused in on our obsession with social media and how technology is the center of human interaction.  The fear, paranoia, and hurt that can form when people can hide behind screens and make unruly comments and lie and think no repercussions can come back at them.  The mask you can wear behind a camera or through a chat room can change your perception of what those people’s lives are like.  Who they are?  How they think?  Even their motives for being online and doing what they are doing.

Searching shows what technology has done to our lives – the good and the bad.  It helps to create a mask, a mask which Margot hid behind for so long after her mother passed away from cancer.  Putting on a brave face for her father and moving past the pain and insecurity she felt.  She talked to people online that didn’t know her story, she took solace in the people that would let her vent without judgment, she distanced herself from most of the people that use to be important to her, and she became agreeable and compliant.  Margot became a loner because she didn’t know how to deal with the pain and in turn, it brought her into an even darker situation.

I don’t want to give you any spoilers, but Debra Messing’s character (detective in the Margot’s missing person’s case) has some skeletons in her closet.  Bravo Messing for a great performance!  The character, Detective Vick is very complex in her thought process on what is right.  The script is on point and the best advice that I can give you while you are watching the film is really listen to the dialogue, read everything that is typed, and pay attention to each character’s actions.  You get to understand their personal thoughts and feelings that they don’t share with anyone.  Their interactions, images, and tone of voice when they are talking to one another are vital to the story.  Attention to detail is key to solving the mystery.

Asif Kapadia, the director of the released documentary Amy stated, “She was the unlucky one to be having a nervous breakdown in the public eye.” Amy Winehouse was a singer all to similar to Kurt Cobain.  An artist in her own right that wasn’t ready for celebrity.  The scrutiny, judgement, and overbearing view of the press and the general public.  She was always a punchline to a joke, and instead of showing support and love with her struggles and misfortune society laughed.  Her drug abuse, alcohol addiction, and bulimia was pushed off as self sabotage when it was a cry for help.  A cry for help that started when she was young.

Her mother couldn’t control her bad behavior and instead of doing something about it, Janis Winehouse never said no, and never disciplined.  Her father, Mitch Winehouse left when Amy was nine years old.  After his disappearing act she became promiscuous, skipping school, and got into drugs and smoking.  She felt that no one cared, so why should she care either.  It seemed that her friends became her family.  Lauren Gilbert, Juliette Ashby, and Nick Shymansky became the people that would do their best to protect her, make the right choices, and they were the ones who tried to get her to go to rehab before the alcohol and drugs got worse in the height of her success; unfortunately they failed.

In the film, it showed that Amy was her own worse critic. She made the statement, “I’m not a natural born performer. I’m a natural singer, but I’m really quite, shy really.”  She grew up idolizing great jazz singers such as Tony Bennett and Frank Sinatra. Artists who come along once in a lifetime, and become classic greats in the history of music.  When Amy released the album Back to Black she made it in that history book.  She had an edge and honesty in the album that could relate to people.  The hit single “Rehab” made her a superstar and celebrity, which in her state of being with the alcohol, drugs, and self-conscientiousness would be her down fall.  The album is full of sadness, heartbreak, and regret.  In “Love Is A Losing Game” the lyrics express falling in love being a series of mistakes:

The song “Back to Black” is one of my favorite on the album as her deep, raspy voice flows over the lyrics and melody just like Frank Sinatra’s style way of carrying the audience over the emotion of every word she breathes.  She loved being in the studio – developing new songs, playing instruments, and learning and honing everything about her craft as a singer and musician.  The song “Back to Black” was more than just about losing her lover.  It was seemed to foreshadow her fate.  She sings:

One of the final scenes in the movie that really stuck with me was when she was watching a video of herself singing with her bodyguard Andrew Morris.  Andrew said that during that time Amy said, “I would give it back, if I could walk down the street.”  Those few words expressed what really mattered to her.  Being normal.  Not living in a fish bowl.  Her life ended tragically by a drug overdose and I still don’t think society has learned anything from the loss of artists like Amy.  For them to continue to create the music we love, they need respect.  Personally, the paparazzi and the people trying to make a buck by making artists sign objects doesn’t show any of kind of respect.  The best you can do for an artist is show your support by going to concerts, posting their music and videos to social media, as well as continuing to listen and be a fan of their work.

Like every sibling relationship, my younger brother and I have the ability to say something and know exactly what the other person is talking about.  Normally because it is a quote from a movie.  Anytime I watch a movie I always find something new that I didn’t see before whether it is a moment between characters that I missed, a line that is insanely funny that I didn’t connect to before, or a heart stopping quote that makes everything finally tie together.  Dancing in a movie can do that without saying one word.  Usually dancing in movies go hand in hand with it being some type of musical, unless it is specifically about dance like “Center Stage” or “Step Up,” but I am not talking about dance focused movies.  I want to talk about movies that have dance in them that make you feel something so powerful that you can’t help but fall in love with the story, the characters, and the inevitable plot twists that the director takes you on.

Over the last thirty years, dance sequences have popped up in movies periodically, but not consistently, which has to do with cost of the choreographer(s) and the dancers, the ability to find the right type of dancer(s)/ actor(s), and the various types of film shots that need to be taken when capturing a dance sequence so you can record the right type of emotion for the viewer.  Needless to say, you need a talented director and one that knows something about dance.  So what makes a movie a success?  Does dance in movies help to sell the film, or is it an added expense that not only increases the production budget but has a large potential to fail as a blockbuster?

Kenny Ortega is an American choreographer and director most notably known for his work on the ‘High School Musical’ trilogy and the 1992 film, ‘Newsies.’  He has a choreographic style that stands out from his strategic layout of group dances in songs such as ‘We’re All in This Together’ and ‘Seize the Day’ to his ability to choreograph for the camera by utilizing movements that are explosive such as chaînés leaps and

pirouette extensions.  Ortega has a way of connecting his choreography with the storyline so it doesn’t seem like the dancing is coming out of no where mixing fantasy with reality through film shots and dance sequences.  For example, in High School Musical 3 during the song ‘Can I Have This Dance’ he blends the asking of a proposal to the prom that has the perfect theme of the waltz and as the two characters sing they waltz and partner throughout the roof of the school.  The director goes from quick feet views to full body circular movement of the camera to a high view of the characters during the partner lifts.  This gives the audience an inside view through each waltz to the emotions that the characters are feeling through a simple touch or a partner lift.  The High School Musical trilogy hit big after the first television release in 2006 so by the time HSM3 came out in 2008 Disney had the budget to do a theatrical production.  The fans pushed the popularity of this made for television story that skyrocketed the careers of the people who worked on these films from the actors such as Zac Eron to the choreographers Ortega, Bonnie Story, and Charles Klapow.  ‘Newsies’ didn’t have the greatest response when it first came out in 1992, but it has some great choreography in it.  For example, the song ‘King of New York’ where not only is there jazz, but also a mix of tap moves such as shuffles, scuffs, and toe hop barrels.  It’s rare to see two different styles mixed within one number.  Having a two drastically different types of dance styles in a number can create difficulty when searching for dancers who are trained in those styles; that is why as a dancer it is always good to be versatile.

I still haven’t figured out what makes a blockbuster hit movie.  I think it’s more like gambling.  Some film productions get a smaller marketing and production budget and then the fans blow up the popularity of it like with High School Musical, where other movies get a larger production budget but not enough marketing is done for it or it doesn’t resinate with the current generation that is being targeted such as ‘Newsies.’  Either way, movie studios bring on the dance because society is ready to be taken on a new ride that doesn’t always have to be capped superheroes and gore.